After suffering through two droughts in 10 years, the fortunes of Central Queensland cattle stud Olive Brahmans turned around when they met a Thai investor interested in their Brahman cows. 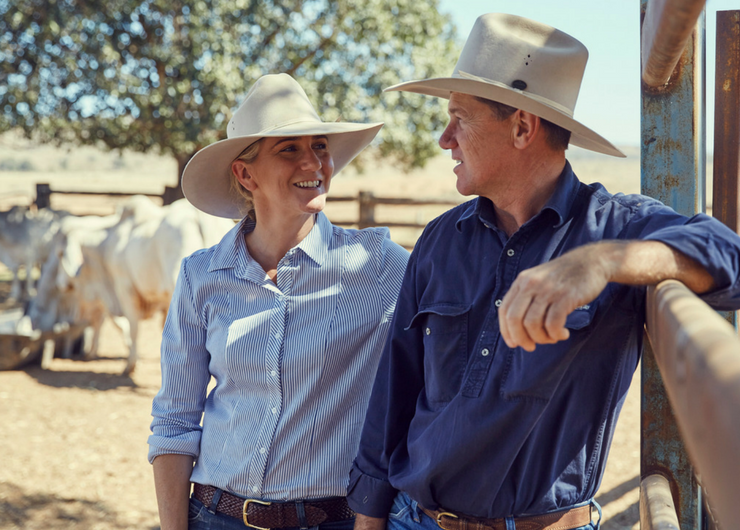 When Ross and Natalie Olive of Olive Brahmans cattle stud reluctantly showed their drought-affected stock to a prospective Thai investor, he was so impressed with the Brahmans’ bone structure he bought 216 breeders from the family. But sealing the export deal wasn’t just about good stock – it was about good moral principles.

Ross Olive’s mother, Maureen Olive, continues to be a long-standing member of the Australian Brahman Breeders’ Association and renowned as the previous owner of Apis Creek Brahman Stud in Central Queensland. Apis Creek Brahmans started with a breeding herd tied to the first Brahman imports. When this family-run operation was dissolved, Ross and his wife Natalie decided to commence their Brahman-breeding operation under the name Olive Brahmans.

A decade later, having ‘genetically engineered’ award-winning cattle and secured an exciting new export relationship, Olive Brahmans has firmly established a brand name throughout Australia and Asia. They now run 2,400 breeders on 20,234 hectares at Marlborough and finish steers on their 1,011-hectare Gogango property.

“Our goal was to establish our new brand name, through recognition of our unique Olive genetics. Improving the quality of our stock and getting the name out there,” says Natalie.

“Our selection criteria is tough and different,” adds Ross. “Our points of difference are the genetics of the herd, good reproductive traits and ensuring a quiet and easy temperament. In 10 years, temperament has played a massive factor in our success in improving stock.”

That stock is now generating a lot of noise in the Australian and Asian cattle industries. When their best female Olive Lady Adelaide won the Brahman Grand Champion Cow at Brisbane EKKA in 2013, Sydney Royal Easter Show 2014, and again the Ekka next year 2014, Australian notaries and international investors began paying attention.

A timely visitor from Thailand

When Prasert Akarasirikanchana, Chairman of the Torch Thai Farming Corporation, first came looking for Brahman breeders to export, Northern Australia was in drought and farmers were reluctant  to showcase their farms – except Olive Brahmans, who felt they had nothing to lose. They agreed to host the prospective investors and Ross became the bus driver, taking them on an eight-day tour of the region. They never knew the animals’ conditions would turn misfortune into opportunity.

“We were experiencing our second major drought in 2013,” Natalie says. “The conditions were terrible, and the animals were so thin. Other farmers thought no one would want to invest in stock like that. In Thailand, the conditions and animals are opposite to Australia. They have rolling green grass, and high rainfall. Despite this, however, they often have thin animals with lower nutrition. The Thai cattle don’t have the same bone structure, quality or strength as ours. Our animals during drought were thin, but that made it possible for them to see their strong bone structure, strength and that they had endurance.”

Prasert’s values also appealed to the Olives – he was not looking to invest for profit alone, but to improve quality of life for local Thai communities and is also passionate about caring for the environment and natural farming methods. 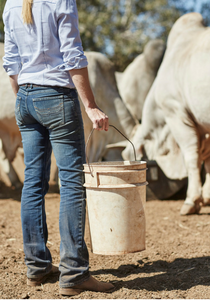 The Olives showed the investors the other family Brahman farms first, then organic food farms, abattoirs and finally they showed Olive Brahmans’ stock.

“The investors kept asking, ‘Why are you showing us the other family farms before yours?’ That’s just what felt right to us. In the end, when they saw our cattle, it sealed the deal and bought 216 breeders. We think it was about the stock quality but it was also about trust, they trusted us,” Ross says.

The other value at the heart of Olive Brahmans’ export success has been “respect for everyone”, a value instilled by Ross’s father, which ultimately enabled them to secure the deal.

“Dad instilled in me so much, everyone loved and respected him,” oss says. “He had time for everybody, whether you had two cows or a 20,000 cow farm. When it came to building relationships with the Thai people, that was important for me.”

In 2014, Prasert diverted a trip to visit the Sydney Royal Easter Show to observe the judging of Olive Lady Adelaide. When she was voted the Grand Champion he purchased her on the spot for $80,000 – an Australian record. He then went on to buy another 200 Brahmans from Olive Brahmans and family members later that year.

The Olives were recipients of a Meat & Livestock Australia and Australian Livestock Exporters’ Council sponsored trip to Indonesia in 2015, gaining valuable insight into the supply chain of Australia live cattle exports.

Ross also recently took a trip to Cambodia investigating other export opportunities for Brahmans in Asia.

With all of their recent success, the Olives are keeping their feet firmly on the ground, focusing on their core business: improving and building seed stock, using IVF extensively to assist, as well as caring for their three children – Andrew, seven, Hayley, six, and Alexander, three.

Could touring China transform your agribusiness?

Will Chinese manufacturers lose in the post-COVID world?

China’s Economy at a Glance – September 2020

Q2 GDP fell by a massive 7% (-6.3% y/y), confirming the large hit to economic activity as a result of the shutdown to limit the COVID-19 pandemic.