How influencer marketing is helping HiSmile build a global brand

From the beginning, Alex Tomic and Nik Mirkovic knew they wanted to think big, and to think global. 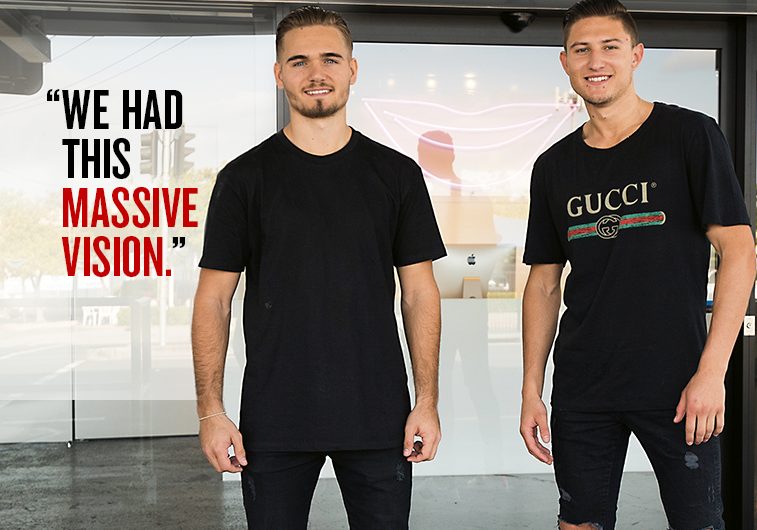 Want your pearly whites a few shades whiter and brighter? You and half the world, if the extraordinary success of Queensland start-up HiSmile is anything to go by.

Founded in 2014 by millennial entrepreneurs and mates Alex Tomic and Nik Mirkovic, the online business sells a range of oral cosmetics, including dental whitening kits and mouthwash, to customers from Brisbane to Beirut and everywhere in between.

Within 18 months, HiSmile hit a turnover of $10 million, in large part due to a marketing strategy that has seen its products endorsed by sporting and showbiz celebrities along with thousands of other social media influencers.

Three years after setting up (virtual) shop, that turnover figure is leaping closer to $50 million. The self- funded venture’s success propelled Tomic and Mirkovic, aged 24 and 22 respectively, onto the BRW Young Rich List in 2017, as its youngest entrants. They share a net worth of $46 million and say the 6,000 to 10,000-plus orders HiSmile dispatches each day are just the beginning.

Why oral cosmetics? Because there was a glaring gap in the market, ready for the filling, Tomic says. He completed six months of a commerce degree in 2013 before dropping out to work on HiSmile with Mirkovic, a semi-professional soccer player and long-time friend.

“Everything in the oral cosmetic industry was generic at that time,” Tomic explains. “We couldn’t identify any brand with a core identity, nothing that really targeted the customer.

“It was a market we thought we could penetrate. We had this massive vision… to rethink the bathroom and create a brand and a culture that customers, especially those in the 18- to 35-year bracket, would align themselves with.”

The pair spent six months researching and developing their first product, a dental whitening kit, which was launched in October 2014 with a ticket price of $79.99.

After clocking brisk early sales, they added toothpaste, mouthwash and a whitening pen to the range, all manufactured in China and dispatched globally from HiSmile’s Gold Coast warehouse.

Tomic and Mirkovic put in just $10,000 apiece to get their enterprise up and running and decided influencer marketing was the best way to build a brand with a modest marketing budget.

Influencer marketing is the strategy of employing an individual with a substantial social media following to promote goods or services compatible with their personal image or brand. Remuneration can be in the form of cash, products or reciprocal endorsements.

“We just thought, let’s get as many people as possible with a big influence to put this product in front of their fans and followers and share what we’re about,” Tomic says.

“This form of marketing is really nothing new – the biggest sports stars have always been influencers for brands like Nike – but it’s been repurposed in the social media age. Influencing now happens on a micro- level because platforms like Facebook give a lot more individuals access to a lot more people.”

“For us, it’s been an exceptional strategy,” Tomic says.

“We realised we had a major international opportunity and in order to take advantage of it we needed to be able to transact in our customers’ native currencies,” Tomic says.

“That’s where NAB is so forward-thinking and ahead of the game. They offer a true multi-currency account.

“NAB’s been an exceptional partner, working with us to link their facilities to the platforms we use and making everything very seamless and clean.”

Kings of the world

Where next for two young men who’ve spent three years working 14 hours a day, while many of their peers enjoyed an extended adolescence?

Global dominance is the long-term goal, according to Tomic.

“Everyone needs to look after their teeth,” he says.

“It might be five, 10, 20 years, but Nik and I are definitely in this for the long term and we think we’re on track. We truly believe we have what it takes to create the biggest brand globally in oral cosmetics.

“We’re young, we’ve got the energy and we don’t have dependents. We’re in a place where we can put all our energy into it: 100 per cent focus on building HiSmile.”